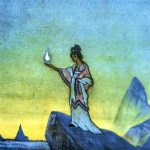 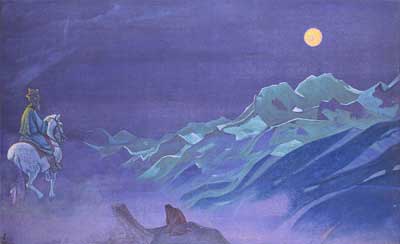 Between 1923 and 1928 Nicholas Roerich went on a series of travels throughout central Asia, accompanied by his son George. In 1926 – the same year that the Nazis sent their first expedition to Tibet – Roerich was also in that country. He spoke with many Lamas and other Tibetan occultists and mystics. They spoke of the imminent arrival of the Maitreya, the Buddhist Messiah, and imparted to Roerich  the spiritual meaning of Altai.

It seems that, among other things, the chief mountain of the Altai range was regarded as the dwelling place of the gods. The Bear and Orion were singled out as being constellations associated with the esoteric wisdom of Altai. The seven stars were seen as the seven Wise Ones, and were also associated with the Mongol legend of Gesar, the Mongol Maitreya, despite his being a warrior rather than a sage. And Gesar was always linked in legend with the Tibetan stories of Shambhala.

Beluka, the principal mountain in the Altai range, has also been put forward as the possible origin of the legend of Mount Meru, abode of the gods. And from Tibet, from the Altai range, civilisation gradually began to spread outwards.

Both black and white magic are possible; one can always choose whether to follow the left or the right hand path. But magic in itself is morally neutral. Tibet held within itself both black and white magicians, and it was, of course, those initiates dedicated to the dark powers of evil who helped Hitler and the Nazis. But other powers existed in Tibet as well, and Roerich, among others, made contact with them.

Roerich himself said, in his book The Heart of Asia, that Shambhala was the fountain and crown of all true wisdom. ‘If you wish to understand Asia and to approach her as a welcome guest’, he wrote, ‘you must meet your host with the most sacred word – Shambhala.’ Roerich and his expedition were based in the Himalayas and had extensive contacts with wise men in Tibet. Roerich became a vehicle of transmission of a Mahatma Morya, who taught a system of Agni Yoga, based on the Kundalini power. Roerich states that a Lama passed through an underground passage in order to reach a sacred place. And the borders of the ‘hidden land’ were marked out carefully with occult symbols.